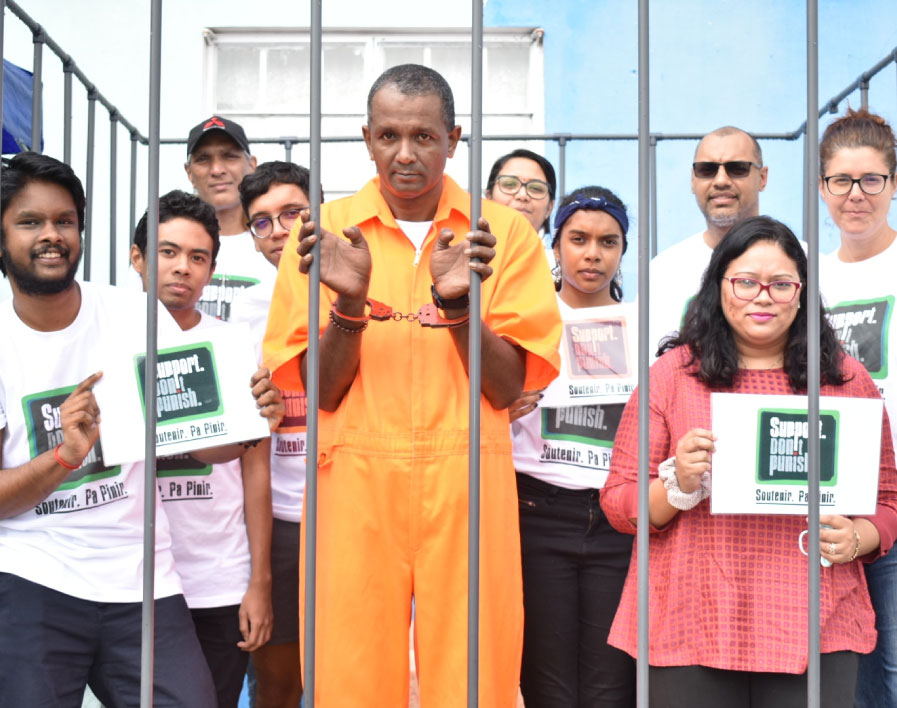 The Collectif Urgence Toxida and AILES (Aide. Infos. Liberté. Espoir. Solidarité) carried out a symbolic action for the international day “Support. Don’t Punish” and launched a petition to demand a real change in drug policies.

The 26th of June is a symbolic date for organisations that campaign for harm reduction policies for people who use drugs. Launched in 2013, the “Support. Don’t Punish” is a global community initiative to support harm reduction and to include health and human rights in drug policies. Through a variety of actions in over 100 countries around the world, harm reduction and human rights activists are campaigning for policy changes to eliminate repressive laws that criminalise people who use drugs. People who use drugs should be supported, not punished or marginalised. A plea that is often misunderstood and is based on the fact that a drug-free society is a utopia.

To mark this day, the Collectif Urgence Toxida and AILES wanted to send a strong message by setting up a mock prison in Mangalkhan in front of the premises of the association AILES. “It is symbolic to place a mock prison in front of our premises, We need to review the system and implement profound changes so that harm reduction is understood. We have been explaining the problem for several years, and this year we are taking action with a petition,” explains Brigitte Michel, manager at AILES. Through this community awareness activity, the idea is to make people understand what is at stake on this day. Workshops and games were also proposed to explain the changes required and personal stories were presented to explain the difficulties faced by women who use drug in particular. The mock prison was used as a backdrop to immortalise the day with a photo gallery.

« The petition is necessary to make our voices heard » says Shatyam Issur, manager of the Collectif Urgence Toxida. To support our harm reduction mission, we demand that drug use be recognized as an addiction and therefore a public health problem. We hope that the methadone substitution treatment be provided in a medical place, hospital or dispensary and not in the police station. Finally, it is important to ask for a revision of the character certificate for drug-related convictions. The petition is still online on the Avaaz.org website and we invite the general population, partners and everyone concerned by this issue to sign it in order to support and not punish. It will then be sent to the different ministries”.

An informative and retrospective video of the day was also published. The Collectif Urgence Toxida and AILES are sending a clear message: Repression is not the solution! Moreover, time is running out to implement important changes. This year again, the confinement has demonstrated the limits of the care of people suffering from addiction, especially at methadone distribution sites. To support this campaign, which is possible with the support of WHRIN (Women Harm Reduction International Network) of which AILES is a member, and also of the IDPC (International Drug Policy Consortium). Follow the Facebook pages of the organisations and sign the online petition on Avaaz.org