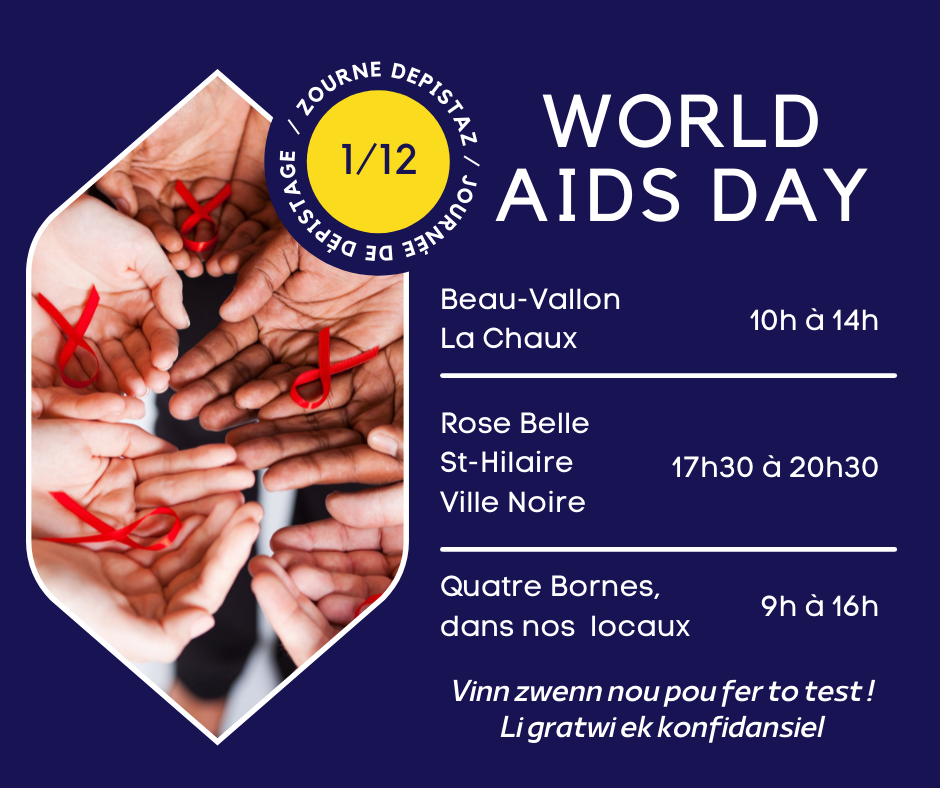 The Collectif Urgence Toxida between concern and hope for the fight against HIV
on the occasion of the international day of December 1st.

On the eve of December 1st, the Collectif Urgence Toxida shares its concern for the future of the fight against HIV. The health crisis not only has an impact on the fight, but the daily work is also greatly impacted. The lack of available material and the sanitary restrictions will probably cause an outbreak of cases. In fact, at the 4th meeting of the High Level Drug and HIV Council, held last September under the chairmanship of the Prime Minister, it was reported that HIV is increasing at the same rate as in previous years and is affecting more young people and women. The new President of CUT, Mr. Zuhayr Panchoo said: “In the past, the transmission of HIV and hepatitis was mainly among men who injected drugs. The harm reduction program has been successful and transmission by injection has decreased considerably. Today, the situation is worrisome because the spread of HIV has become widespread and now affects women as well as men.

Another concern for those involved in the fight against HIV is the upcoming departure of the Global Fund, which has planned to stop its involvement in Mauritius in 2023. For the past 12 years, the Global Fund has been the main donor in the fight against HIV to the government and NGOs. Their withdrawal will potentially create a huge financial deficit. The Collectif Urgence Toxida, together with other organizations, is already looking for solutions and is asking for meetings with the main actors to prepare for the future.

A note of hope comes from the United Kingdom, which has just approved a long-acting injectable antiretroviral treatment for HIV for adults. Indeed, people living with HIV in England and Wales could be entitled to an injectable antiretroviral treatment every two months, which amounts to 6 treatments per year, rather than daily pills. Note that in America and Scotland this treatment is already approved. Two injectable drugs, cabotegravir and rilpivirine, have been recommended by the UK National Institute for Health and Care (NICE) after trials showed them to be as effective as daily pills.

To benefit from these injections, people must have a low and stable viral load and therefore already be on antiretroviral treatment in oral tablets. According to the UNAIDS HIV cascade, there are 14,000 people living with HIV in Mauritius. 6,400 have tested positive, 2,900 are on treatment and 2,100 people have an undetectable viral load, which means that they cannot be transmitted. There is therefore a big gap between the number of people who know their status and the number of people who are currently on treatment. Injection treatment could therefore be a good alternative and encourage more people to seek treatment.

Another advantage with this treatment is that it would allow people living with HIV to potentially suffer less discrimination with this more discreet and less regular treatment. For priority populations, medical treatment often proves to be an obstacle course, and this news could be a great step forward in Mauritius for better adherence to treatment. It will be interesting to see what the Mauritian government proposes in light of this new information and scientific advances for this injectable treatment. Of course, the use of condoms and clean equipment during injections remains the best solution to avoid any contamination. For high-risk behaviors, pre-exposure prophylaxis (PrEP) is also a safe method to reduce risk.

Another note of hope comes from Latin America. Patient “Esperanza,” a 30-year-old woman in Argentina has just been declared cured without any treatment. It is thanks to the in-depth study of her placenta during her delivery that an international team of researchers, who had been following the young woman since 2017, were able to affirm and report that there is no trace of HIV anymore. This is the second confirmed case of a natural cure without antiretroviral treatment; the first patient was a 60-year-old from San Francisco in 2020. Scientists explain that a small group of people between 0.5 and 1% of the world’s population would have a natural resistance to HIV, they are called the “elite controllers”.

In view of the news of the Collectif Urgence Toxida on the occasion of this international day, Shatyam Issur, manager of the association, recalls. “The health situation prevents us from conducting a large screening campaign, but every day during our interventions we offer the test to our beneficiaries. For the day of December 1st, our caravan will offer screening in Beau Vallon, La Chaux from 10am to 2pm and in Rose Belle, St-Hilaire and Ville noire from 5:30pm to 8:30pm. We also invite anyone who wants to be tested to come to our office in Quatre Bornes, the tests are free and confidential.”

On December 1st, discover also on the Facebook page of the Collectif Urgence Toxida, an explanatory video of sensitization on the HIV which is addressed to the youngest particularly, because the reduction of the risks it begins with the education.